Jamie Samuelsen, a radio personality who has been a fixture in the world of Detroit sports for more than 20 years, according to radio station 97.1 The Ticket , died at the age of 48 on August 1.

Samuelsen had announced his diagnosis of colon cancer just days earlier on his show, the Jamie & Stoney Show, to the shock and dismay of listeners. He is survived by his wife, Christy McDonald, and their three children, Caroline, Josh and Catherine.

Here’s what you need to know: 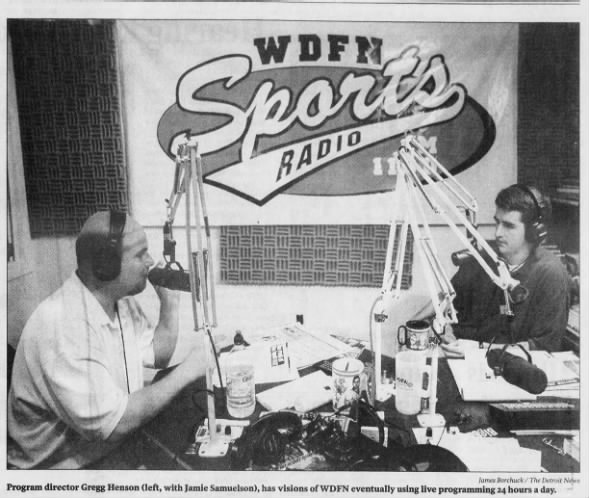 In 1997, Samuelsen was part of an operation that chronically ruffled Detroit sports’ teams’ feathers, as the Detroit Free Press reported :

They tweak. And they taunt. And they tease … How else to explain Scott Mitchell calling into WDFN to argue with his armchair critics? Or the Lions’ public relations department yanking game credentials, citing irresponsible journalism?

According to the Free Press, Samuelsen often acted as the voice of reason, leading to some interesting back-and-forth between him and his co-host, program director Gregg Henson: “An example: in the middle of a heated discussion two weeks ago, Henson called Samuelsen – the part-time Chicago sympathizer – a ‘Jordan butt-suck’ on the air,” the Free Press reported . “Then Henson called for their listeners to boycott Sports Illustrated.” Henson was unhappy that the Detroit Red Wings, who had won the Stanley Cup, weren’t put on the magazine’s cover even though Michael Jordan was put on the cover when the Chicago Bulls won the NBA Finals.

In that article , the paper noted that at least one caller per show would call in to complain about Henson, but there was at least one listener who, Samuelsen joked, had a more quiet animus: “My mother can’t stand him,” he said.

2. Samuelsen Went On To Become A Fixture of Detroit Sports

One of the greatest athletes on the planet. Pictured along with Chiefs QB Patrick Mahomes. pic.twitter.com/ltGu1TsEOD

Over the lifespan of his career, Samuelsen did it all.

Along with tag-teaming the “guy radio” show with Henson on WDFN-AM, he was also freelance writing about lacrosse in 1998. In 2003, Samuelsen was on the air doing play-by-play coverage.

His sports blog was a regular of the Detroit Free Press; in 2013, the paper attributed his blog to saying Calvin Johnson was the “best wide receiver in (the) NFL.” In 2011, the paper also attributed a quippier statement from Sameulsen’s blog: “If MSU can play on a boat, Pistons should try to play a game downtown.”

Samuelsen also worked at Fox2 television and was featured in shows that aired on NFL Network.

According to the Detroit Free Press , Samuelsen’s voice came through WDFN-AM, WRIF-FM and WCSX-FM before he joined 97.1 The Ticket in 2012 and launched his show , the Jamie & Stoney Show in 2016.

3. Samuelsen And His Wife Were A Dynamic Duo

Samuelsen and his wife, WTVS-TV anchor and reporter Christy McDonald , were something of a local celebrity couple who were often featured in Detroit newspapers. Their escape from the daily grind of covering news and sports was featured in the Detroit Free Press as they described date night at the Ritz-Carlton:

At the plus Dearborn hotel, their emphasis is on each other, not the rest of the world. A no-cell-phone rule is put into effect … On Ritz evenings, they linger over dinner at a nice local restaurant before checking in, remembering to save room for the hotel’s strawberries dipped in white and black chocolate to resemble a tuxedo.

When the couple had their baby boy, it was announced in a 2006 edition of the Detroit Free Press. “Offspring are springing out all over. Let’s start with the locals,” the paper reported. “WXYZ-TV (Channel 7) reporter-anchor Christy McDonald and hubby WDFN-AM (1130) morning man Jamie Samuelsen have welcomed a son, Joshua Thomas Samuelsen. He was born April 13 and tipped the scales at 7 pounds, 9 ounces.”

We decided to dress up for Easter dinner – hope everyone is hanging in there! 💕🐇

When Jamie was diagnosed with #coloncancer 1.5 years ago, we decided to keep the news private. It was excruciating, navigating treatments, information, hospital systems – (a thread )

You want to know how tough Jamie Samuelsen was? He was diagnosed with colon cancer 19 months ago, and he never got one damn break. He fought like hell and the cancer wouldn’t let up. Not for one minute. But he never wanted people to know until the end. Incredible strength.

Samuelsen announced that he had colon cancer on July 27, where he told of his show listeners that he had been battling the disease for 19 months, 97.1 The Ticket reported . He said that part of the reason he kept the diagnosis discreet was for his family, according to the Detroit Free Press :

Obviously, all of our lives were turned upside down when we found out, but we wanted to make their lives as normal as possible. Plus, given the fact that I work in radio and my wife works in TV, I wanted to make sure it didn’t affect their lives.

He also said that his morning show from 6-10 a.m. helped him continue to enjoy life despite the diagnosis, MLive reported :

Each morning since my diagnosis, I got up, turned on the radio mic and got to talk sports. I needed the escape from cancer, just like so many of our listeners who face hardships, grief and illness, too, they turned to us in the morning for some levity in this crazy world. So I wanted to continue to have fun and not let cancer get in the way of doing what I loved. Connecting with listeners, laughing, teasing Stoney, all of it, it helped me be normal while continuing to fight this disease.

Samuelsen also took the time to make an important public service announcement . Colonoscopies are more important than ever, Samuelsen urged, telling listeners of his show, “More people under the age of 50 are being diagnosed with colon cancer than ever before and colon cancer is the second leading cause of cancer deaths. Make sure you talk with your doctor — and get that colonoscopy,” WXYZ reported .

The Detroit Free Press also reported that three of Samuelsen’s close friends had colonoscopies which led to them getting polyps removed: “I want people of my age, in their 40s, to get a colonoscopy. You hear about it all the time, and you’re like ‘blah, blah, blah,’ in one ear and out the next. But it can literally save your life,” he said.

We share in the tragic loss felt by the Detroit community at the news of Jamie Samuelsen’s passing. Jamie’s personality and spirit were felt by all on Lions game days, and his voice on the airwaves brought us together. Our thoughts and prayers go out to the Samuelsen family. pic.twitter.com/9zMGzIFQmn

From football to basketball , Detroit’s sports teams have offered condolences to Samuelsen’s family and acknowledged his contributions to their world.

The Detroit Lions described his death as a “tragic loss,” while the Detroit Pistons also released a Twitter thread on his death, writing:

It is with great sorrow that the Detroit Pistons acknowledge the passing of Jamie Samuelsen. Jamie touched many sports fans throughout Detroit during his 20-plus year radio career.

He was a true gentleman and his professionalism and passion for the Pistons and Detroit sports was evident whether covering a game live at the arena, broadcasting over radio and television, or writing for print.

We send our deepest condolences to his wife, Christy, their three children and his extended family and friends during this most difficult time.

Samuelsen was also missed dearly by his fellow sports journalists, such as Bob Wojnowski, where Samuelsen once cooked Super Bowl chili:

Wojnowski broke the news of Semuelsen’s passing on Twitter , writing “I am so sad and sorry to pass this along, at the family’s request. Jamie Samuelsen, the best damn friend you could ever have, a tremendous broadcaster on @971theticketxyt passed away tonight at 48. He was surrounded by his wonderful family, and he went peacefully.”